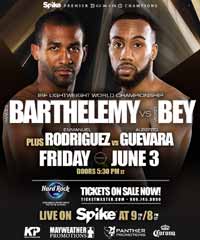 Review by AllTheBestFights.com: 2016-06-03, fight not particularly good between Alberto Guevara and Emmanuel Rodriguez: it gets two stars.

Alberto Guevara entered this fight with a professional record of 24-2-0 (9 knockouts) and he is ranked as the No.24 super bantamweight in the world. He lost to Shinsuke Yamanaka in 2013 (=Yamanaka vs Guevara) but since then he has won six consecutive bouts beating Edward Mansito in 2016.
His opponent, the undefeated Emmanuel Rodriguez, has an official record of 14-0-0 (10 knockouts) and he entered as the No.73 bantamweight. He fought four times last year winning over Gabor Molnar, Luis Hinojosa, Alex Rangel and Eliecer Aquino. Guevara vs Rodriguez is valid for the WBC Latino and WBA Fedelatin bantamweight titles; undercard of Rances Barthelemy vs Mickey Bey. Watch the video and rate this fight!