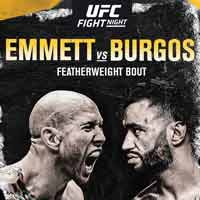 Review by AllTheBestFights.com: 2020-06-20, good fight between Josh Emmett and Shane Burgos: it gets three stars (UFC Fight of the Night).
Josh Emmett entered this fight with a pro mma record of 15-2-0 (53% finishing rate) and he is ranked as the No.6 featherweight in the world (currently the #1 in this division is Alexander Volkanovski). He lost to Jeremy Stephens in 2018 (Josh Emmett vs Jeremy Stephens) but then he has beat Michael Johnson (Josh Emmett vs Michael Johnson) and Mirsad Bektic (Josh Emmett vs Mirsad Bektic).
His opponent, Shane Burgos, has a record of 13-1-0 (77% finishing rate) and he entered as the No.20 in the same weight class. He was defeated by Calvin Kattar in 2018 (Shane Burgos vs Calvin Kattar) but then he has won three fights beating Cub Swanson (Cub Swanson vs Shane Burgos) and Makwan Amirkhani in 2019. Emmett vs Burgos is on the undercard of Curtis Blaydes vs Alexander Volkov – UFC on ESPN 11. Watch the video and rate this fight!