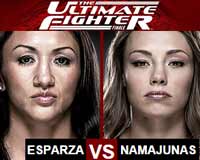 Review: 2014-12-12, great fight between Carla Esparza and Rose Namajunas: it gets three stars (UFC Performance of the Night). The Invicta Fc strawweight champion Carla Esparza entered this fight with a professional mma record of 9-2-0 (67% finishing rate) and she is ranked as the No.4 women’s strawweight in the world, she suffered her last defeat in 2011 when she faced Jessica Aguilar, since then she has won four consecutive fights.
Her opponent, the black belt in tae-kwon-do and karate Rose Namajunas, has an official record of 2-1-0 (100% submission victory rate) and she entered as the No.6 in the same weight class but she lost her last bout, against Tecia Torres. Esparza vs Namajunas, main event of the UFC – Tuf 20 Finale, is valid for the inaugural UFC women’s strawweight title; they also faced each other a second time on May 7, 2022 (Rose Namajunas vs Carla Esparza 2). Watch the video and rate this fight!