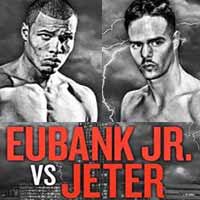 Review by AllTheBestFights.com: 2015-10-24, disappointing fight between Chris Eubank Jr and Tony Jeter: it gets two stars.

Chris Eubank Jr entered this fight with a professional boxing record of 19-1-0 (14 knockouts) and he is ranked as the No.8 middleweight in the world (currently the #1 in this division is Gennady Golovkin) while his opponent, Tony Jeter, has an official record of 20-4-1 (14 knockouts). Both boxers lost once in 2014: Eubank was defeated by Billy Joe Saunders (via split decision, Saunders vs Eubank) but he came back to win in 2015 beating Dmitry Chudinov (=Chudinov vs Eubank) while Jeter lost to Patrick Nielsen (=Nielsen vs Jeter) and then he has won four consecutive bouts. Eubank Jr vs Jeter is valid for the interim WBA World middleweight title. Watch the video and rate this fight!