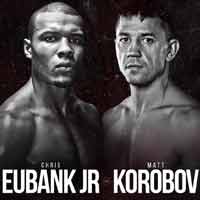 Review by AllTheBestFights.com: 2019-12-07, we hope to see a rematch between Chris Eubank Jr and Matt Korobov: it gets two stars.

The former interim Wba Mw and Ibo super-Mw champion Chris Eubank Jr entered this fight with a pro boxing record of 28-2-0 (21 KOs=75%) and he is ranked as the No.2 super middleweight in the world (currently the #1 in this division is Callum Smith). He lost to George Groves last year (Chris Eubank Jr vs George Groves) but then he has beat JJ McDonagh (Chris Eubank Jr vs JJ McDonagh) and James DeGale (James DeGale vs Chris Eubank Jr).
His opponent, the former Olympian Matvey Korobov, has a record of 28-2-1 (14 knockouts) and he entered as the No.31 middleweight. In his last three fights he has beat Jonathan Batista, has lost to Jermall Charlo (Jermall Charlo vs Matt Korobov) and has tied with Immanuwel Aleem (Matt Korobov vs Immanuwel Aleem). Eubank vs Korobov is valid for the interim WBA World middleweight title; undercard of Jermall Charlo vs Dennis Hogan. Watch the video and rate this fight!