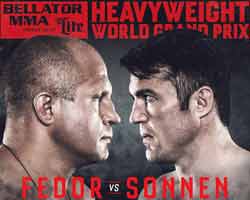 Review by AllTheBestFights.com: 2018-10-13, great fight between Fedor Emelianenko and Chael Sonnen: it gets three stars.

The 42-year-old former Pride, world combat sambo champion and black belt in judo Fedor Emelianenko entered this fight with a mma record of 37-5-0 (76% finishing rate) and he is ranked as the No.26 heavyweight in the world. ‘The Last Emperor’ fought just four times since 2012 winning three bouts, against Singh Jaideep (Fedor Emelianenko vs Singh Jaideep), Fabio Maldonado (mma Fight of the Year candidate, Fedor vs Maldonado) and Frank Mir (hi last fight, Fedor Emelianenko vs Frank Mir), but in 2017 he had also lost once to Matt Mitrione (Fedor Emelianenko vs Matt Mitrione).
His opponent, Chael Sonnen, has an official record of 30-15-1 (40% finishing rate) and he entered as the No.22 in the same weight class. He lost to Tito Ortiz last year (Ortiz vs Sonnen) but then he has won over Wanderlei Silva (Sonnen vs Silva) and Quinton ‘Rampage’ Jackson (Quinton Rampage Jackson vs Chael Sonnen). Fedor vs Sonnen, main event of Bellator 208, is the semifinal of the Bellator Heavyweight Grand Prix tournament. Watch the video and rate this fight!