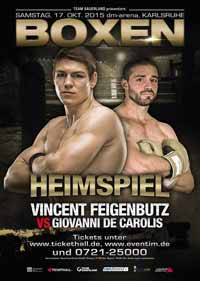 The 20-year-old Vincent Feigenbutz (11 years younger than De Carolis) entered this fight with a boxing record of 20-1-0 (19 KOs=95%) and he is ranked as the No.35 super middleweight in the world. He suffered his only loss in 2012 at his second professional bout, against Roman Alesin, since then he has collected 19 consecutive victories beating Mauricio Reynoso in his last fight (=Feigenbutz vs Reynoso).
His opponent, Giovanni De Carolis, has an official record of 23-5-0 (11 knockouts) and he entered as the No.28 in the same weight class. He lost to Arthur Abraham in 2013 (=Abraham vs De Carolis) but then he has won three bouts defeating Mouhamed Ali Ndiaye in his last one (=De Carolis vs Ali Ndiaye). Feigenbutz vs De Carolis is valid for the interim WBA and GBU World super middleweight titles; they also faced each other a second time on January 9, 2016 (=Feigenbutz vs De Carolis II . Watch the video and rate this fight!