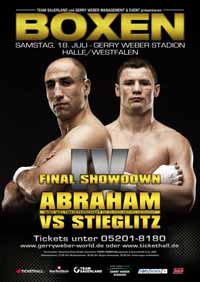 Review by AllTheBestFights.com: 2015-07-18, good exchanges between Vincent Feigenbutz and Mauricio Reynoso: it gets three stars.

The 19-year-old Vincent Feigenbutz (19 years younger than Reynoso) entered this fight with a pro boxing record of 19-1-0 (18 KOs=95%) and he is ranked as the No.26 super middleweight in the world while his opponent, Mauricio Reynoso, has a record of 15-1-1 (11 knockouts). Both boxers suffered their only loss in 2012: Feigenbutz was defeated by Roman Alesin at his second professional boxing fight while Reynoso lost to Jaime Barboza. After losing the German has won 18 consecutive fights while the Peruvian fought just once beating Mariano Jose Riva. Feigenbutz vs Reynoso is valid for the interim WBA World super middleweight title; undercard of Arthur Abraham vs Robert Stieglitz 4. Watch the video and rate this fight!