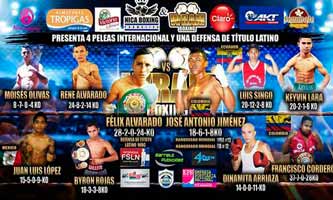 Review by AllTheBestFights.com: 2017-05-26, nice exchanges between Felix Alvarado and Jose Jimenez: it gets three stars.

Felix Alvarado entered this fight with a pro boxing record of 28-2-0 (24 KOs=86%) and he is ranked as the No.10 light flyweight in the world (currently the #1 in this division is Kosei Tanaka). He suffered two consecutive losses between 2013 and 2014, against Kazuto Ioka (=Ioka vs Alvarado) and Juan Crlos Reveco (4-stars fight, Reveco vs Alvarado), but since then he has won ten bouts beating Karluis Diaz in his last one.
His opponent, Jose Antonio Jimenez, has a record of 18-6-1 (8 knockouts) and he entered as the No.35 in the same weight class. He lost to Jose Argumedo last year (=Argumedo vs Jimenez) but he came back to win in 2017 against Jorge Ballesteros. Felix Alvarado vs Jose Antonio Jimenez is valid for the WBC Latino light flyweight title. Watch the video and rate this fight!