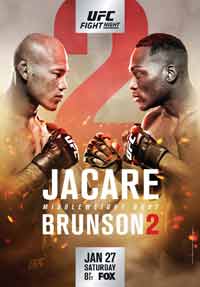 Review by AllTheBestFights.com: 2018-01-27, some good exchanges between Dennis Bermudez and Andre Fili but it is not enough to get three stars: it gets two.

Dennis Bermudez entered this fight with a mma record of 16-7-0 (44% finishing rate) and he is ranked as the No.25 featherweight in the world but he lost four out of his last six bouts losing to Chan Sung Jung (=Bermudez vs Jung) and Darren Elkins in 2017 (=Elkins vs Bermudez).
His opponent, Andre Fili, has an official record of 17-5-0 (65% finishing rate) and he entered as the No.40 in the same weight class. He fought twice last year losing to Calvin Kattar and beating Artem Lobov. Bermudez vs Fili is on the undercard of Ronaldo Jacare Souza vs Derek Brunson 2 – UFC on Fox 27. Watch the video and rate this fight!

(Free embeddable video hosted on Streamable.com and not uploaded by AllTheBestFights)