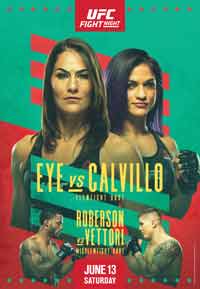 Review by AllTheBestFights.com: 2020-06-13, some good exchanges between Andre Fili and Charles Jourdain but it is not enough to get three stars: it gets two.
Andre Fili entered this fight with a mma record of 20-7-0 (60% finishing rate) and he is ranked as the No.29 featherweight in the world but he comes off the loss against Sodiq Yusuff; before this bout, in 2019, he had beat Sheymon Moraes and Myles Jury (Myles Jury vs Andre Fili).
His opponent, Charles Jourdain, has an official record of 10-2-0 (100% finishing rate) and he entered as the No.66 in the same weight class. He fought three times last year defeating Damien Lapilus and Doo Ho Choi but between these two bouts he lost to Desmond Green. Fili vs Jourdain is on the undercard of Jessica Eye vs Cynthia Calvillo – UFC on ESPN 10. Watch the video and rate this fight!