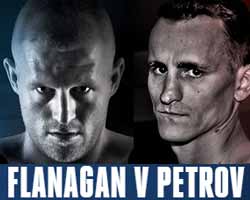 Review by AllTheBestFights.com: 2017-04-08, disappointing fight between Terry Flanagan and Petr Petrov: it gets two stars.

The undefeated Wbo champion Terry Flanagan entered this fight with a perfect boxing record of 32-0-0 (13 knockouts) and he is ranked as the No.5 lightweight in the world (currently the #1 in this division is Jorge Linares). He fought three times last year winning over Derry Mathews (=Flanagan vs Mathews 2), Mzonke Fana (=Flanagan vs Fana) and Orlando Cruz (=Flanagan vs Cruz).
His opponent, Petr Petrov, has an official record of 38-4-2 (19 knockouts) and he entered as the No.10 in the same weight class. He suffered his last defeat when he faced Dejan Zlaticanin in 2013, after this bout he has won six consecutive fights beating Marvin Quintero (=Quintero vs Petrov) and Michael Perez in 2016 (=Petrov vs Perez). Terry Flanagan vs Petr Petrov is valid for the WBO World lightweight title (Flanagan’s fifth defense). Watch the video and rate this fight!