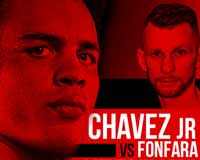 Review by AllTheBestFights.com: 2015-04-18, nice and tough toe-to-toe fight between Julio Cesar Chavez Jr and Andrzej Fonfara: it is close to get four stars!

Julio Cesar Chavez Jr entered this fight with a pro boxing record of 48-1-1 (32 knockouts) but he is not ranked as he hasn’t fought since March 1, 2014 when he defeated Brian Vera in their rematch (=Chavez Jr vs Vera 2). Chavez won the Wbc Mw world title in 2011, against Sebastian Zbik (=Chavez vs Zbik) but then, after three successfully defense, he lost the belt with Sergio ‘Maravilla’ Martinez in 2012 (=Martinez vs Chavez Jr).
His opponent, the former Ibo light-Hw champion Andrzej Fonfara, has an official record of 26-3-0 (15 knockouts) and he entered as the No.11 light heavyweight in the world. He fought twice last year losing to Adonis Stevenson (=Stevenson vs Fonfara) but then he came back to win beating Doudou Ngumbu (=Fonfara vs Ngumbu). Chavez vs Fonfara is valid for the vacant WBC International light heavyweight title. Watch the video and rate this fight!