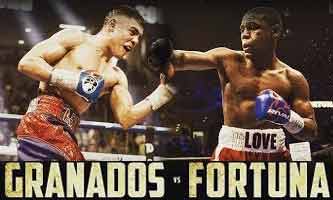 Review by AllTheBestFights.com: 2018-06-16, nice and tough exchanges between Javier Fortuna and Adrian Granados: it gets three stars.

The former world champion in two different weight classes Javier Fortuna entered this fight with a record of 33-2-1 (23 knockouts) and he is ranked as the No.9 lightweight in the world (currently the #1 in this division is Vasyl Lomachenko) but he comes off the loss with Robert Easter Jr (via split decision, Robert Easter Jr vs Javier Fortuna); before this bout, in 2017, he had won over Mario Beltre and Nicolas Polanco.
His opponent, Adrian Granados, has an official boxing record of 18-6-2 (12 knockouts) and he entered as the No.15 welterweight but he comes off two consecutive defeats, with Adrien Broner (via split decision, Broner vs Granados) and Shawn Porter (Shawn Porter vs Adrian Granados); before these two bouts, in 2016, he had beat Ariel Vasquez. Fortuna vs Granados is on the undercard of Errol Spence Jr vs Carlos Ocampo. Watch the video and rate this fight!