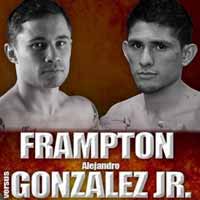 The undefeated Carl Frampton entered this fight with a perfect boxing record of 20-0-0 (14 knockouts) and he is ranked as the No.1 super bantamweight in the world. He won the Ibf super-Bw belt last year when he faced Kiko Martinez in their second fight (=Martinez vs Frampton 2), after this bout he has defended the title once beating Chris Avalos (=Frampton vs Avalos).
His opponent, Alejandro Gonzalez Jr, has an official record of 25-1-2 (15 knockouts) and he entered as the No.56 in the same weight class. He suffered his only loss when he faced Juan Alberto Rosas in 2014, after losing he has won three consecutive fights. Frampton vs Gonzalez Jr is valid for the IBF World super bantamweight title (Frampton’s second defense). Watch the video and rate this fight!