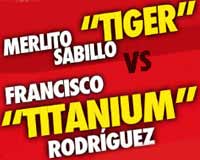 Review: 2014-03-22, high pace with some nice and tough toe-to-toe exchanges: Merlito Sabillo vs Francisco Rodriguez Jr gets three stars. The undefeated Merlito Sabillo entered this fight with a pro boxing record of 23-0-1 (12 knockouts) and he is ranked as the No.7 minimumweight in the world, last year he fought three times winning the Wbo world title against Luis De la Rosa in March and then he successfully defended the title twice but his last bout ended in a draw (=Sabillo vs Buitrago).
His opponent, Francisco Rodriguez Jr, has an official record of 13-2-0 (9 knockouts) and he entered as the No.8 in the same weight class, he suffered his second defeat in 2013 when he faced the undefeated Roman Gonzalez (=Gonzalez vs Rodriguez), after that bout he has fought and won twice; currently the #1 in this division is Katsunari Takayama. Sabillo vs Rodriguez Jr is valid for the WBO minimumweight title (Sabillo’s third defense). Watch the video and rate this fight!