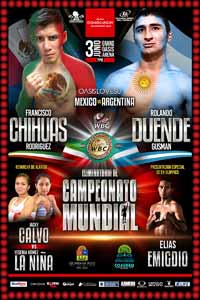 Review by AllTheBestFights.com: 2017-06-03, nice exchanges between Francisco Rodriguez Jr and Hector Gusman: it gets three stars.

The former Wbo and Ibf minimumweight champion Francisco Rodriguez Jr entered this fight with a professional boxing record of 22-4-1 (14 knockouts) and he is ranked as the No.10 super flyweight in the world (currently the #1 in this division is Srisaket Sor Rungvisai). ‘Chihuas’ Rodriguez lost two consecutive bouts in 2015, against Donnie Nietes (=Nietes vs Rodriguez) and Moises Fuentes (=Rodriguez vs Fuentes), but then he has won four bouts beating Hajime Nagai in 2017 (=Rodriguez Jr vs Nagai).
His opponent, Hector Rolando Gusman, has an official record of 15-3-0 (9 knockouts) but ‘El Duende’ Gusman lost three out of his last four fights, the last one against Juan Jose Jurado. Francisco Rodriguez Jr vs Hector Rolando Gusman is the final eliminator for the WBC flyweight title. Watch the video and rate this fight!