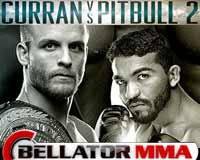 Review: 2014-09-05, disappointing fight between Pat Curran and Patricio Freire: their second fight gets two stars. Pat Curran entered this fight with a professional mma record of 20-5-0 (60% finishing rate) and he is ranked as the No.5 featherweight in the world (currently the #1 in this division is Jose Aldo); he suffered his last defeat at the end of 2013 when he faced Daniel Straus in their second fight losing his Bellator Fw belt (=Curran vs Straus II) but he took revenge on him in 2014 in their third bout (=Straus vs Curran III).
His opponent, the black belt in Brazilian jiu-jitsu Patricio ‘Pitbull’ Freire, has an official record of 21-2-0 (76% finishing rate) and he entered as the No.7 in the same weight class, he suffered his last defeat last year when he faced for the first time Curran (=Curran vs Freire I), after that bout he collected four consecutive victories winning the Bellator Fw tournament (season 9) beating Justin Wilcox in the final (=Freire vs Wilcox). Curran vs Pitbull Freire 2, main event of Bellator 123, is valid for the Bellator featherweight title (Curran’s first defense). Watch the video and rate this fight!