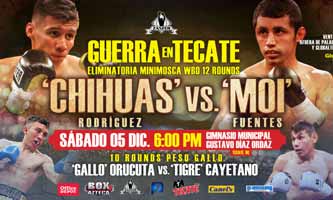 The former Wbo and Ibf minimumweight champion Francisco Rodriguez Jr entered this fight with a professional boxing record of 17-3-1 (11 knockouts) and he is ranked as the No.6 light flyweight in the world. He has fought twice in 2015 beating Jomar Fajardo (=Rodriguez vs Fajardo 2) but then he lost to #1 Donnie Nietes (=Nietes vs Rodriguez).
His opponent, the former Wbo minimumweight and interim light-Flw champion Moises Fuentes, has an official record of 22-2-1 (12 knockouts) and he entered as the No.13 flyweight. He lost to Donnie Nietes last year (=Nietes vs Fuentes 2) but then he has won three consecutive fights beating Oswaldo Novoa in his last one (=Novoa vs Fuentes). ‘Chihuas’ Rodriguez vs Fuentes is the main event of the evening. Watch the video and rate this fight!