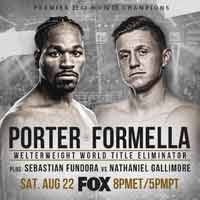 Review by AllTheBestFights.com: 2020-08-22, some good exchanges between Sebastian Fundora and Nathaniel Gallimore but it is not enough to get three stars: it gets two.
The undefeated Sebastian Fundora entered this fight with a pro boxing record of 14-0-1 (9 knockouts) and he is ranked as the No.23 super welterweight in the world. In his last three bouts he has beat Hector Manuel Zepeda, has tied with Jamontay Clark and has defeated Daniel Lewis.
His opponent, Nathaniel Gallimore, has a record of 21-4-1 (17 KOs=81%) and he entered as the No.64 in the same weight class but he won just one out of his last four fights, against Antonio Todd last year, after this bout he has lost to Erickson Lubin (Erickson Lubin vs Nathaniel Gallimore). Gallimore vs Fundora is on the undercard of Shawn Porter vs Sebastian Formella. Watch the video and rate this fight!