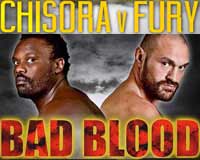 Review: 2014-11-29, fight not so exciting between Dereck Chisora and Tyson Fury: it gets two stars. Dereck Chisora entered this fight with a professional boxing record of 20-4-0 (13 knockouts) and he is ranked as the No.6 heavyweight in the world (currently the #1 in this division is Wladimir Klitschko); he suffered three consecutive defeats between 2011 and 2012, against Robert Helenius (=Helenius vs Chisora), Vitali Klitschko (=Klitschko vs Chisora) and David Haye (=Haye vs Chisora), after this bout he has won five times, the last one against Kevin Johnson (=Chisora vs Johnson).
His opponent, the undefeated Tyson Fury, has a perfect record of 22-0-0 (16 knockouts) and he entered as the No.12 in the same weight class, he has fought once in 2014 beating Joey Abell (=Fury vs Abell). In their first bout Fury defeated Chisora via unanimous decision (on July 23, 2011: Fury vs Chisora I); this second fight is valid for the EBU (European) and vacant British heavyweight titles. Watch the video and rate this fight!