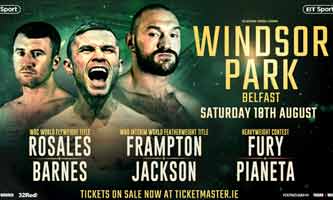 Review by AllTheBestFights.com: 2018-08-18, disappointing fight between Tyson Fury and Francesco Pianeta: it gets two stars.

The undefeated former IBF, IBO, WBA, and WBO Hw champion Tyson Fury entered this fight with a pro boxing record of 26-0-0 (19 knockouts) and he is ranked as the No.5 heavyweight in the world (currently the #1 in this division is Anthony Joshua). In his last three fights he has beat Christian Hammer (Fury vs Hammer) and Wladimir Klitschko in 2015 (Wladimir Klitschko vs Tyson Fury) and, in 2018, Sefer Seferi (Tyson Fury vs Sefer Seferi).
His opponent, Francesco Pianeta, has a record of 35-4-1 (21 knockouts) and he entered as the No.140 in the same weight class but he lost two out of his last three bouts, with Kevin Johnson and Petar Milas; between these two bouts he beat Daso Simeunovic. Fury vs Pianeta is on the undercard of Carl Frampton vs Luke Jackson. Watch the video and rate this fight!