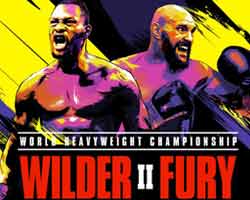 Review by AllTheBestFights.com: 2020-02-22, good fight between Deontay Wilder and Tyson Fury 2: it gets three stars; however, this match was named ‘Boxing Fight of the Year 2020’ by our users (check out the full ranking here, 2020 Boxing Fans Ranking).

The undefeated former Olympian and current Wbc Hw champion Deontay Wilder entered this fight with a professional record of 42-0-1 (41 KOs=98%) and he is ranked as the No.2 heavyweight in the world (currently the #1 in this division is Anthony Joshua). In his last three bouts he has tied with Tyson Fury in their first fight (4-stars fight, Deontay Wilder vs Tyson Fury I) but then he has beat Dominic Breazeale (Deontay Wilder vs Dominic Breazeale) and Luis Ortiz in their rematch (Deontay Wilder vs Luis Ortiz 2).
His opponent, the undefeated former IBF, IBO, WBA and WBO Hw champ Tyson Fury, has an official boxing record of 29-0-1 (20 knockouts) and he entered as the No.4 in the same weight class. After drawing with Wilder in 2018 he has won over Tom Schwarz (Tyson Fury vs Tom Schwarz) and Otto Wallin (Tyson Fury vs Otto Wallin). Here are some boxing champions that think Wilder will be the winner: Larry Holmes, Suga Ray Leonard, Thomas Hearns, Evander Holyfield, David Haye, Manny Pacquiao and Clarissa Shields; while here the ones who think Fury will defeat the American: Mike Tyson, Paulie Malignaggi, Anthony Joshua, Saul Canelo Alvarez, Billy Joe Saunders, Frank Bruno, Ricky Hatton and Carl Frampton. Deontay Wilder vs Tyson Fury 2 is valid for the WBC World heavyweight title (Wilder’s tenth defense). Watch the video and rate this fight!

Result: Click here to show the fight’s result
Tyson Fury vs Deontay Wilder (TKO at 1:39, round 7)

Their next fight: Tyson Fury vs Deontay Wilder 3