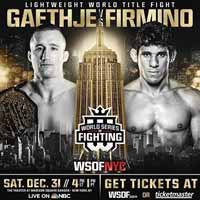 Review by AllTheBestFights.com: 2016-12-31, exciting and tough fight between Justin Gaethje and Luiz Firmino: it gets three stars.

The undefeated Wsof Lw champion Justin Gaethje entered this fight with a perfect mma record of 16-0-0 (87% finishing rate) and he is ranked as the No.11 lightweight in the world. He has fought once in 2016 beating Brian Foster (=Gaethje vs Foster).
His opponent, the black belt in Bjj Luiz Firmino (who replaces Joao Zeferino), has a record of 19-7-0 (42% finishing rate) and he entered as the No.72 in the same weight class. ‘Buscape’ Firmino has fought twice in 2016 defeating Caros Fodor (=Firmino vs Fodor) and losing to Brian Foster. Gaethje vs Firmino, main event of Wsof 34, is valid for the WSOF lightweight title (Gaethje’s fifth defense). Watch the video and rate this fight!