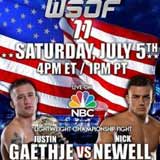 Review: 2014-07-05, tough exchanges and good finish: Justin Gaethje vs Nick Newell gets three stars. Both undefeated and with the same record of 11-0-0 Justin Gaethje is ranked as the No.20 lightweight in the world (91% finishing rate, with only one victory by submission) while the one-armed fighter Nick Newell has two victories by ko/tko and 8 via submission. Gaethje has already fought in 2014 defeating Richard Patishnock in a bout valid for the Wsof Lw title (=Gaethje vs Patishnock) while Newell debuted in 2013 in the “World Series of Fighting” beating Keon Caldwell (=Newell vs Caldwell) and Sabah Fadai in the first round (=Newell vs Fadai). Gaethje vs Newell, main event of WSOF 11, is valid for the Wsof lightweight title (Gaethje’s first defense). Watch the video and rate this fight!

gif hosted at this link thanks to ZombieProphet