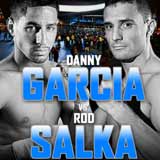 Review: 2014-08-09, Danny Garcia vs Rod Salka gets three stars thanks to a spectacular finish. The undefeated Danny Garcia entered this fight with a perfect record of 28-0-0 (16 knockouts) and he is ranked as the No.1 light welterweight in the world, in his last three bouts he managed to win over Zab Judah (=Garcia vs Judah), Lucas Matthysse (=Garcia vs Matthysse) and Mauricio Herrera (=Garcia vs Herrera).
His opponent, Rod Salka, has an official record of 19-3-0 (3 knockouts) and he entered as the No.71 lightweight, he suffered his last defeat in 2013 when he faced Ricardo Alvarez for the WBC Continental Americas light welterweight title; after that bout he managed to beat then-undefeated Alexei Collado (=Collado vs Salka). Garcia vs Salka is the main event of the evening. Watch the video and rate this fight!