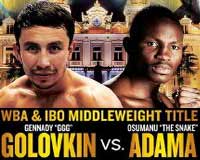 Review: 2014-02-01, we need something more from a two two-world-titles-fight: Gennady Golovkin vs Osumanu Adama gets two stars. The undefeated Gennady Golovkin entered this fight with a perfect record of 28-0-0 (25 KOs=89%) and he is ranked as the No.2 middleweight in the world, he finished his amateur career with an outstanding record of 345-5 but he couldn’t win the gold medal at the 2004 Olympic Games in Athens losing the final to the Russian Gaydarbek Gaydarbekov who never turned pro; Golovkin has never been knocked down or knocked out in all his 378 fights, both as a professional and amateur!!
Osumanu Adama has an official record of 22-3-0 (16 knockouts) and he entered as the No.12 in the same weight class (currently the #1 in this division is Sergio ‘Maravilla’ Martinez), in this fight Adama tries to win his first world title, he already fought for the the IBF world title in 2012 but he lost to Daniel Geale (=Geale vs Adama). ‘GGG’ Golovkin vs Adama is valid for the IBO and WBA World middleweight titles, both held by Golovkin. Watch the video and rate this fight!