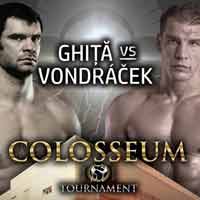 Review by AllTheBestFights.com: 2019-03-29, good finish between Daniel Ghita and Petr Vondracek: it gets three stars.

Daniel Ghita entered this fight with a pro kickboxing record of 51-11-0 (40 KOs=78%) and he is ranked as the No.4 heavyweight in the world. He lost to Rico Verhoeven in 2014 (Rico Verhoeven vs Daniel Ghita 2) but since then he has fought just once beating Dzevad Poturak in 2018 (Daniel Ghita vs Dzevad Poturak 4).
His opponent, the former Wako Pro champion Petr Vondracek, has a record of 55-28-0 (33 knockouts) and he entered as the No.23 in the same weight class. He fought three times last year losing to Ivan Bartek and Ondrej Hutník but then he beat Victor Mihai. Ghita vs Vondracek is the main event of Colosseum Tournament 11. Watch the video and rate this fight!