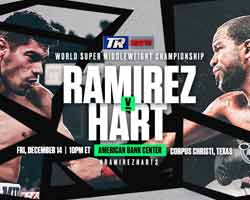 Review by AllTheBestFights.com: 2018-12-14, nice and tough fight between Gilberto Ramirez and Jesse Hart 2: it gets three stars.

The undefeated Wbo super-Mw champion Gilberto Ramirez Sanchez entered this fight with a perfect record of 38-0-0 (25 knockouts) and he is ranked as the No.2 super middleweight in the world (currently the #1 in this division is Callum Smith). In his last three fights he has won over Jesse Hart (in their first fight, Ramirez vs Hart), Habib Ahmed (Gilberto Ramirez vs Habib Ahmed) and Roamer Alexis Angulo (Gilberto Ramirez vs Roamer Alexis Angulo).
His opponent, Jesse Hart, has an official boxing record of 25-1-0 (21 KOs=84%) and he entered as the No.7 in the same weight class. After losing to ‘Zurdo’ Ramirez last year he has beat Thomas Awimbono (Jesse Hart vs Thomas Awimbono), Demond Nicholson and Mike Gavronski (Jesse Hart vs Mike Gavronski). Ramirez vs Hart 2 is valid for the WBO World super middleweight title (Ramirez’s fifth defense). Watch the video and rate this fight!