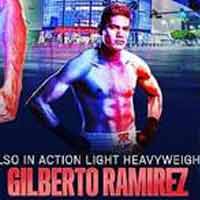 Review by AllTheBestFights.com: 2019-04-12, some good exchanges between Gilberto Ramirez and Tommy Karpency but it is not enough to get three stars: it gets two.

The undefeated Wbo super-Mw champion Gilberto Ramirez entered this fight with a perfect boxing record of 39-0-0 (25 knockouts) and he is ranked as the No.3 super middleweight in the world. He fought three times last year winning over Habib Ahmed (Gilberto Ramirez vs Habib Ahmed), Roamer Alexis Angulo (Gilberto Ramirez vs Roamer Alexis Angulo) and Jesse Hart (Gilberto Ramirez Sanchez vs Jesse Hart 2).
His opponent, Tommy Karpency, has a record of 29-6-1 (18 knockouts) and he entered as the No.33 light heavyweight. He lost to Oleksandr Gvozdyk in 2016 (Oleksandr Gvozdyk vs Tommy Karpency), but then he has won three bouts beating Mickey Scarborough, Rubin Williams and Marlon Hayes. Ramirez vs Karpency is on the undercard of Vasyl Lomachenko vs Anthony Crolla. Watch the video and rate this fight!