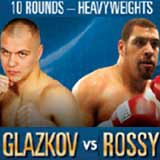 Review: 2014-08-09, disappointing fight between Vyacheslav Glazkov and Derric Rossy: it gets two stars. The undefeated Vyacheslav Glazkov entered this fight with a pro boxing record of 17-0-1 (11 knockouts) and he is ranked as the No.4 heavyweight in the world (currently the #1 in this division is Wladimir Klitschko), the only man who stopped him in a draw was Malik Scott in 2013 (=Glazkov vs Scott), after that bout he beat Byron Polley, Garrett Wilson (=Glazkov vs Wilson) and Tomasz Adamek (=Adamek vs Glazkov).
His opponent, Derric Rossy, has a record of 29-8-0 (14 knockouts) and he entered as the No.85 in the same weight class, he suffered two consecutive defeats between 2013 and 2014 (against Fres Oquendo and Joey Dawejko) but he came back to victory in his last bout beating Joe Hanks. Glazkov vs Rossy is the main event of the evening. Watch the video and rate this fight!