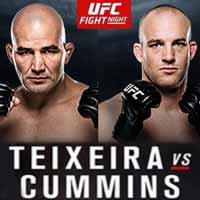 Review by AllTheBestFights.com: 2015-11-07, nice and tough fight between Glover Teixeira and Patrick Cummins: it gets three stars.

The black belt in Brazilian jiu-jitsu Glover Teixeira entered this fight with a pro mma record of 23-4-0 (87% finishing rate) and he is ranked as the No.7 light heavyweight in the world. He lost twice last year, against #1 Jon Jones (=Jones vs Teixeira) and with Phil Davis (=Teixeira vs Davis), but then he came back to win in 2015 beating Ovince St Preux (=Teixeira vs St Preux).
His opponent, Patrick Cummins, has a record of 8-2-0 (75% finishing rate) and he entered as the No.33 in the same weight class. He has fought twice in 2015 losing to Ovince St Preux and winning over Rafael Cavalcante. Teixeira vs Cummins is on the undercard of Vitor Belfort vs Dan Henderson 3 – UFC Fight Night 77. Watch the video and rate this fight!