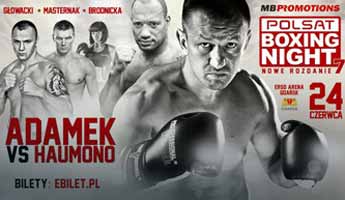 Review by AllTheBestFights.com: 2017-06-24, pretty good fight between Krzysztof Glowacki and Hizni Altunkaya: it gets three stars.

The former Wbo Cw champion Krzysztof Glowacki entered this fight with a boxing record of 26-1-0 (16 knockouts) and he is ranked as the No.4 cruiserweight in the world. He fought twice last year beating Steve Cunningham (=Glowacki vs Cunningham) but then he lost to #1 Oleksandr Usyk (=Glowacki vs Usyk).
His opponent, the undefeated Hizni Altunkaya, has a perfect record of 29-0-0 (17 knockouts) and he entered as the No.48 in the same weight class. In his last three bouts he has won over Gogita Gorgiladze, Dejan Krneta and Ramazi Gogichashvili. Krzysztof Glowacki vs Hizni Altunkaya is on the undercard of Tomasz Adamek vs Solomon Haumono. Watch the video and rate this fight!