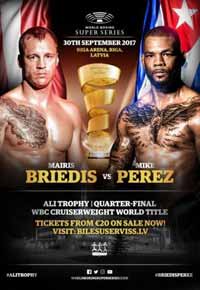 Review by AllTheBestFights.com: 2017-09-30, fight not particularly good between Krzysztof Glowacki and Leonardo Bruzzese: it gets two stars.

The former Wbo Cw champion Krzysztof Glowacki entered this fight with a pro record of 27-1-0 (17 knockouts) and he is ranked as the No.4 cruiserweight in the world. He suffered his only loss when he faced #1 Oleksandr Usyk last year (=Glowacki vs Usyk), after this bout he has beat Hizni Altunkaya in 2017 (=Glowacki vs Altunkaya).
His opponent, Leonardo Damian Bruzzese, has a boxing record of 18-3-0 (6 knockouts) and he has already fought three times in 2017 defeating Peter Hegyes twice and losing to Juho Haapoja. Krzysztof Glowacki vs Leonardo Damian Bruzzese is on the undercard of Mairis Briedis vs Mike Perez. Watch the video and rate this fight!