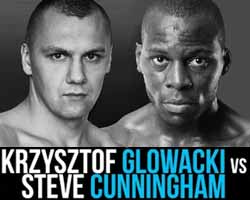 Review by AllTheBestFights.com: 2016-04-16, nice and tough fight between Krzysztof Glowacki and Steve Cunningham: it gets three stars.

The undefeated Wbo champion Krzysztof Glowacki entered this fight with a perfect record of 25-0-0 (16 knockouts) and he is ranked as the No.2 cruiserweight in the world (currently the #1 in this division is Denis Lebedev). He fought twice in 2015 beating Nuri Seferi (=Glowacki vs Seferi) and Marco Huck (=Huck vs Glowacki).
His opponent, the former Ibf Cw champion Steve Cunningham, has a boxing record of 28-7-1 (13 knockouts) and he entered as the No.12 heavyweight but his last victory occurred in 2014 when he defeated Natu Visinia (=Cunningham vs Visinia). After this bout he lost to Vyacheslav Glazkov (=Glazkov vs Cunningham) and he drew with Antonio Tarver (=Tarver vs Cunningham). Glowacki vs Cunningham is valid for the WBO World cruiserweight title (Glowacki’s first defense); undercard of Errol Spence Jr vs Chris Algieri. Watch the video and rate this fight!