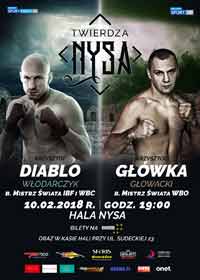 Review by AllTheBestFights.com: 2018-02-10, nice and tough exchanges between Krzysztof Glowacki vs Serhiy Radchenko: it gets three stars.

The former Wbo Cw champion Krzysztof Glowacki entered this fight with a professional record of 28-1-0 (18 knockouts) and he is ranked as the No.4 cruiserweight in the world. He suffered his only loss when he faced #1 Oleksandr Usyk in 2016 (Glowacki vs Usyk), after this bout he has beat Hizni Altunkaya (Glowacki vs Altunkaya) and Leonardo Damian Bruzzese (Krzysztof Glowacki vs Leonardo Bruzzese).
His opponent, the undefeated Serhiy Radchenko (who replaces Manroy Sadiki), has a perfect record of 6-0-0 (1 knockout) and he fought just once in 2017 beating Bohdan Zlyvko. Glowacki vs Radchenko is on the undercard of Krzysztof Wlodarczyk vs Adam Gadajew . Watch the video and rate this fight!

we hope to find a longer video