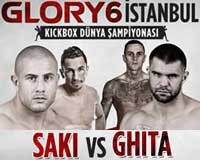 Review: 2013-04-06, great fight with three knockdowns: the second fight between Gokhan Saki and Daniel Ghita gets three stars. Gokhan Saki (78-16-0) entered as the No.3 heavyweight in the world while Daniel Ghita (47-8-0) entered as the No.2. In their first fight Saki defeated Ghita (December 11, 2010); Saki vs Ghita 2 is the main event of GLORY 6 Istanbul. Watch the video!