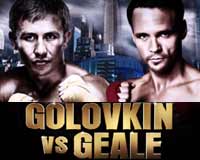 Review: 2014-07-26, good fight between Gennady Golovkin and Daniel Geale: it gets three stars. The undefeated Gennady Golovkin entered this fight with a perfect record of 29-0-0 (26 KOs=90%) and he is ranked as the No.1 middleweight in the world, he has already fought in 2014 beating Osumanu Adama in February (=Golovkin vs Adama).
His opponent, Daniel Geale, has an official record of 30-2-0 (16 knockouts) and he entered as the No.5 in the same weight class, the only two fights he lost were world title bouts and he was defeated via split decision: against Anthony Mundine in 2009 (4-stars-figt Mundine vs Geale) and against Darren Barker in 2013 (=Geale vs Barker); he came back to victory in 2014 beating Garth Wood (=Geale vs Wood). ‘GGG’ Golovkin vs Geale is valid for the IBO and WBA Super World middleweight titles (both belts held by Golovkin). Watch the video and rate this fight!