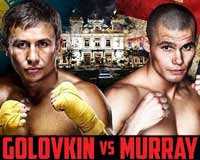 Review by AllTheBestFights.com: 2015-02-21, great fight between Gennady Golovkin and Martin Murray: it gets three stars.

The undefeated Gennady Golovkin entered this fight with a perfect boxing record of 31-0-0 (28 KOs=90%) and he is ranked as the No.1 middleweight in the world; he fought three times in 2014 beating Osumanu Adama (=Golovkin vs Adama), Daniel Geale (Golovkin vs Geale) and Marco Antonio Rubio (=Golovkin vs Rubio).
His opponent, Martin Murray, has an official record of 29-1-1 (12 knockouts) and he entered as the No.9 in the same weight class, he suffered his only defeat in 2013 when he faced the former Wbc champion Sergio ‘Maravilla’ Martinez (=Martinez vs Murray), since then he has won four consecutive bouts, the last one against Domenico Spada (=Murray vs Spada). ‘GGG’ Golovkin vs Murray is valid for the WBA, IBO and interim WBC World middleweight titles (all held by Golovkin). Watch the video and rate this fight!

(Alternative video hosted on Myvideo.ge, to report it please visit this link where the video is hosted)