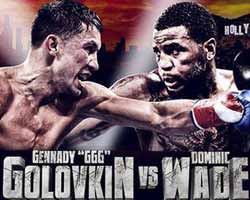 Review by AllTheBestFights.com: 2016-04-23, pretty good fight between Gennady Golovkin and Dominic Wade: it gets three stars.

Both undefeated, the Kazakh Gennady Golovkin entered this fight with a perfect boxing record of 34-0-0 (31 KOs=91%) and he is ranked as the No.2 middleweight in the world (currently the #1 in this division is Saul ‘Canelo’ Alvarez) while his opponent, Dominic Wade, has an official record of 18-0-0 (12 knockouts) and he entered as the No.12 in the same weight class. GGG fought three times last year winning over Martin Murray (=Golovkin vs Murray), Willie Monroe Jr (=Golovkin vs Monroe) and David Lemieux (=Golovkin vs Lemieux) while Wade fought just once beating Sam Soliman (=Soliman vs Wade). Golovkin vs Wade is valid for the WBA, IBF, IBO and interim WBC World middleweight titles. Watch the video and rate this fight!