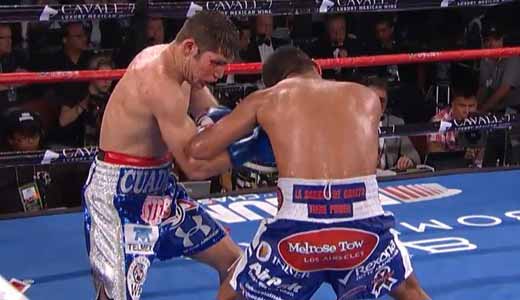 Review by AllTheBestFights.com: 2016-09-10, tremendous pace from the first bell thanks to an amazing performance by both boxers: this is professional boxing at his very very best and this is one of the best boxing fights of 2016, Roman Gonzalez vs Carlos Cuadras gets four stars!

Both undefeated, the Wbc super-Flw championCarlos Cuadras entered this fight with a professional boxing record of 35-0-1 (27 KOs=77%) and he is ranked as the No.1 super flyweight in the world while his opponent, the world champion in three different weight classes Roman Gonzalez, has a perfect record of 45-0-0 (38 KOs=84%) and he entered as the No.1 flyweight. The only man who stopped Cuadras in a draw was Jose Salgado in 2014 (=Cuadras vs Salgado), after this fight he has collected five victories beating Richie Mepranum in 2016 (=Cuadras vs Mepranum) while ‘Chocolatito’ Gonzalez has won over Edgar Sosa (=Gonzalez vs Sosa), Brian Viloria (=Gonzalez vs Viloria) and McWilliams Arroyo in his last three fights (=Gonzalez vs Arroyo). Principe’ Cuadras vs Gonzalez is valid for the WBC World super flyweight title (Cuadras’ seventh defense). Watch the video and rate this fight!