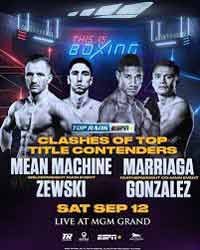 Review by AllTheBestFights.com: 2020-09-12, pretty good fight between Miguel Marriaga and Joet Gonzalez: it gets three stars.
Miguel Marriaga entered this fight with a pro record of 29-3-0 (25 KOs=86%) and he is ranked as the No.25 featherweight in the world. He lost to Vasyl Lomachenko in 2017 (Vasyl Lomachenko vs Miguel Marriaga) but then he has won four bouts defeating Ruben Cervera and Alfredo Mejia Vargas in 2019.
His opponent, Joet Gonzalez, has an official boxing record of 23-1-0 (14 knockouts) and he entered as the No.20 in the same weight class but he comes off his first loss, suffered against Shakur Stevenson last year (Shakur Stevenson vs Joet Gonzalez); before this fight he had beat Manuel Avila and Rodrigo Guerrero. Gonzalez vs Marriaga is on the undercard of Egidijus Kavaliauskas vs Mikael Zewski. Watch the video and rate this fight!