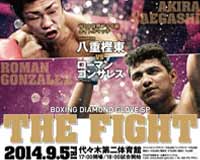 Review: 2014-09-05, two true champions in a very nice fight with an exciting finish: Akira Yaegashi vs Roman Gonzalez is close to get four stars. Akira Yaegashi entered this fight with a professional boxing record of 20-3-0 (10 knockouts) and he is ranked as the No.1 flyweight in the world, he suffered his last loss in 2012 when he faced then-undefeated Kazuto Ioka in a bout valid for the WBC and WBA minimumweight titles (=Ioka vs Yaegashi), after that bout Yaegashi moved up in weight class to the flyweight division winning the Wbc Flw belt against Toshiyuki Igarashi (=Igarashi vs Yaegashi) and successfully defended it three times.
His opponent, the undefeated Roman Gonzalez, has a perfect record of 39-0-0 (33 KOs=84%) and he entered as the No.5 in the same weight class, he was the Wba minimum and light-flyweight champion from 2008 to 2012 when he moved up in weight class to the flyweight. ‘Chocolatito’ Gonzalez vs Yaegashi is valid for the WBC flyweight title (Yaegashi’s fourth defense), first world title shot in the flyweight division for Gonzalez. Watch the video and rate this fight!