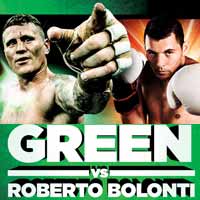 Review by AllTheBestFights.com: 2015-08-19, fight not particularly good between Danny Green and Roberto Bolonti: it gets two stars.

The former three time world champion in three weight classes Danny Green entered this fight with a professional boxing record of 33-5-0 (28 KOs=85%) but he is not ranked as he hasn’t fought since November 21, 2012 when he defeated Shane Cameron (=Green vs Cameron).
His opponent, Roberto Feliciano Bolonti, has an official record of 36-3-0 (25 knockouts) and he entered as the No.36 light heavyweight in the world. He suffered his last loss in 2014 when he faced Juergen Braehmer (=Braehmer vs Bolonti), after this bout he faced Jean Pascal (fight ended in a no-contest, Pascal vs Bolonti) and he beat Williams Ocando. Green vs Bolonti is the main event of the evening. Watch the video and rate this fight!