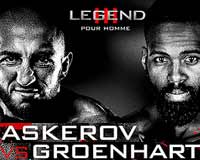 Review: 2014-04-05, explosive exchanges and great finish: Dzhabar Askerov vs Murthel Groenhart is close to get four stars. Dzhabar Askerov entered this fight with a professional kickboxing record of 83-30-1 (41 knockouts) and he is ranked as the No.8 super welterweight in the world, last year he fought eight times losing only to Steve Moxon by split decision (in Australia).
His opponent, Murthel Groenhart, has an official record of 55-16-3 (30 knockouts) and he entered as the No.7 in the same weight class, he lost two out of his last four bouts: first against Robin van Roosmalen (=Groenhart vs van Roosmalen) and then to Davit Kiria; in 2014 he has fought once defeating Teo Mikelic. Askerov vs Groenhart is the main event of “LEGEND 3: Pour Homme”. Watch the video and rate this fight!