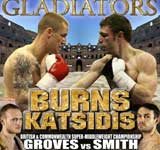 Review: 2011-11-05, nice knockout of George Groves that defeated Paul Smith in the second round: three stars. The undefeated George Groves (13-0-0) entered as the No.27 super middleweight in the world while Paul Smith (31-2-0) entered as the No.33. Groves vs Smith is valid for the BBBofC British and Commonwealth super middleweight titles (undercard of Ricky Burns vs Michael Katsidis). Watch the video!