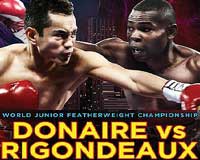 Review: 2013-04-13, even though there was one knockdown the fight between Nonito Donaire and Guillermo Rigondeaux was very disappointing with both boxers throwing an average of 28 punches and landing less than 10 punches per round: poor fight, it gets two stars. Nonito Donaire (31-1-0, 20 KOs) entered as the No.1 super bantamweight in the world while the undefeated Guillermo Rigondeaux (11-0-0, 8 KOs) entered as the No.3; Donaire’s only loss came in 2001 at his second professional fight. Donaire vs Rigondeaux is valid for the WBO and WBA super bantamweight titles. Watch the video!