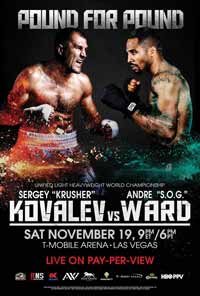 The undefeated Oleksandr Gvozdyk entered this fight with a perfect record of 11-0-0 (9 KOs=82%) and he is ranked as the No.7 light heavyweight in the world (currently the #1 in this division is Sergey Kovalev). He has already fought three times in 2016 winning over Mike Snider, Nadjib Mohammedi and Tommy Karpency (=Gvozdyk vs Karpency).
His opponent, the former Ibo super-Mw champion Isaac Chilemba, has an official boxing record of 24-4-2 (10 knockouts) and he entered as the No.10 in the same weight class but he comes off two consecutive losses, against Eleider Alvarez (=Alvarez vs Chilemba) and Sergey Kovalev (=Kovalev vs Chilemba). Gvozdyk vs Chilemba is valid for the NABF light heavyweight title; undercard of Sergey Kovalev vs Andre Ward. Watch the video and rate this fight!