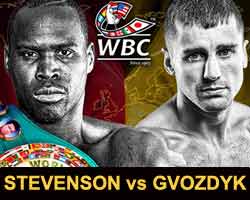 Review by AllTheBestFights.com: 2018-12-01, good fight between Adonis Stevenson and Oleksandr Gvozdyk: it gets three stars.

The 41 years-old Wbc light-Hw champion Adonis Stevenson (10 years older than Gvozdyk) entered this fight with a boxing record of 29-1-1 (24 KOs=83%) and he is ranked as the No.2 light heavyweight in the world (currently the #1 in this division is Eleider Alvarez). He suffered his only defeat when he faced Darnell Boone in 2010 (but Adonis took revenge on him in 2013 Stevenson vs Boone 2), since then ‘Superman’ Stevenson has collected 16 victories and one draw, against Badou Jack in 2018 (Adonis Stevenson vs Badou Jack); before this bout he had defeated Andrzej Fonfara in 2017 (Adonis Stevenson vs Andrzej Fonfara 2).
His opponent, the undefeated Olympian Oleksandr Gvozdyk, has a perfect record of 15-0-0 (12 KOs=80%) and he entered as the No.6 in the same weight class. In his last three fights he has won over Yunieski Gonzalez (Oleksandr Gvozdyk vs Yunieski Gonzalez), Craig Baker (Oleksandr Gvozdyk vs Craig Baker) and Mehdi Amar (Oleksandr Gvozdyk vs Mehdi Amar). Stevenson vs Gvozdyk is valid for the WBC World light heavyweight title (Stevenson’s tenth defense). Watch the video and rate this fight!