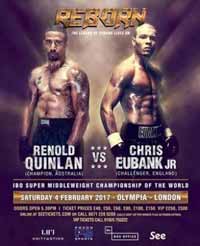 Review by AllTheBestFights.com: 2017-02-04, disappointing fight between Christian Hammer and David Price: it gets two stars.

Christian Hammer entered this fight with a record of 20-4-0 (11 knockouts) and he is ranked as the No.10 heavyweight in the world (currently the #1 in this division is Anthony Joshua). He suffered his last loss when he faced former #1 Tyson Fury in 2015 (=Fury vs Hammer), after this fight he has won over Sherman Williams, Michael Sprott and Erkan Teper (=Teper vs Hammer).
His opponent, David Price, has a boxing record of 21-3-0 (18 KOs=86%) and he entered as the No.36 in the same weight class. He lost to Erkan Teper in 2015 (4-stars fight, Teper vs Price) but then he came back to win in 2016 defeating Vaclav Pejsar and Ivica Perkovic. Christian Hammer vs David Price is on the undercard of Chris Eubank Jr vs Renold Quinlan. Watch the video and rate this fight!